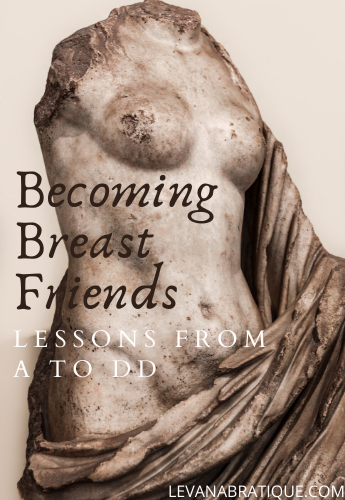 Boobs, knockers, tatas — they go by many names, but whatever you may call yours, breasts are a big deal. Mine have played a major role in the development of my body confidence, and it wasn’t until recently that I began to pay more attention to them and the impact they'd had on my life.

I want my daughter to understand more about her body than what I knew. I want her to be confident enough to ask questions. I want her to learn to love herself so she can understand and love her body at each stage, as I am learning to now.

Hello out there! My name is Sabreena Miller and I am the new writer for the Levana Bratique blog. This is a bit of my story.

My “boob story” started a little later than the girls I knew. Being a late bloomer caused me to be much more observant and sensitive to the experiences of the girls around me; an odd little voyeur, taking field notes.

During the summer when I was roughly 10 years old, a family friend was over to play in my cousins’ pool. We would climb the ladder, jump in, and do it over again, all afternoon. But, one of those repetitions was not like the others. The friend climbed up the ladder, dove into the pool as we all had, and, this time, when she came up, her bikini top had slipped off. We were in shock. My male cousin laughed. She was devastated. At that moment, I remember being not only embarrassed for her but also terrified for myself. The shame she felt added to my growing concern about my own development, or lack thereof. Why had her experience been so heavy for me?

I can still feel the weight of “being left behind” as my friends stepped further into womanhood. I vividly recall a very tv-worthy experience that came at 12-years old, one that I most certainly brought on myself. I was in 7th grade when, over Christmas break, I was given hand-me-downs from my older cousin. Inside this haul was the holy grail of items for a girl like me: a red, padded, push-up bra. I wore it during my entire break. This newfound confidence made me just bold enough to wear it at the start of the second semester. I believed that an empty bra would turn my life around, make me more attractive, more accepted. And so, like magic only I believed in, I’d gone from a flat chest to a B-cup in a matter of weeks, and it did not go unnoticed by my classmates. I was publicly outed in the locker room. I was laughed at by my crush during class. I was devastated. I believe I left my “boobs” at home the next day.

I had a completely flat chest until the 8th grade, but by the time I’d left high school I was sporting a woman’s frame and getting some warranted attention. In college, I’d proudly go braless on occasion because they stayed perfectly in place. I even got them adorned with piercings. I loved this body.

There was nothing more to really think about when it came to them. They barely crossed my mind unless I was trying on a v-neck or a new club dress to highlight my figure. I ignored the warnings from women older than me, my mother included, who’d say it wouldn’t last. I couldn't imagine that.

But, just as they said — and before I realized — it happened.

The line between my college days and motherhood is very blurred for me. I met my husband in January of 2017. We were publicly engaged by June and expecting that November.

Two years ago, I became a mother and when it came time to put my mammary glands to use, they failed me. I just couldn’t get these things to work! I truly owe my sanity during that time to FDA regulated powdered formula. I was ashamed of that, resented them. I hated reading the heartfelt and sometimes pompous stories about “liquid gold” and the bonding experiences between babies and breastfeeding mothers — mothers whose boobs produced so much milk that they could sell it, donate, or even feed other peoples’ babies. It wasn’t until someone uttered three words to me that my perspective changed on maternal care: “Fed is Best”. I thought I was failing him, but breastfeeding wasn’t a part of his and my story. Accepting this, we grew closer.

It is, however, a very big part of my and my daughter’s journey.

Two years later and I’m on baby number two, and my two tatas are leaking milk. As I write this, my 3-month old daughter grows restless with me while I try to balance work and life. My body is responding to her urgency. My shirt is now stained. Overall, I don't recognize these two anymore. My nipples are without shape and form and I’m afraid that, when I eventually stop breastfeeding, they’ll go flat and low. I go through bouts of smelling like soapy milk, clothes drenched, brand new mattress ruined, spraying my baby in the face when she unlatches. She’s a casualty. I feel vile. I’m still learning. I have a growing number of friends with kids around the same age as mine. I've joked with more than one about getting the infamous "mommy makeover" — or cosmetic surgery to reverse the effects of pregnancy, childbirth, and breastfeeding. But, believe it or not, I love this.

I thought breastfeeding would make me uncomfortable. Breasts are rarely touted for their intended use, but more often for how they attract people to them sexually. But, I know now that intimacy is a shapeshifter and takes many different forms.

I’ve never felt closer to someone as I do to her. I am more confident and less stressed being able to nourish her on demand. And, that’s not to boast because I know both sides now, deeply. But, I’m also not ashamed to admit that breastfeeding has been fulfilling. I’m not sure how I’ll feel when it’s time to wean. My misshapen breasts will be a constant reminder of the connection we built.

What is happening to me? To be a woman is to be ever-changing. I’m learning that now as I inch closer to year 30. No more crop tops to showcase youthfulness and perk. Instead, as the “baby fat” is shedding, I’m lathering myself, daily, in Bio Oil, wearing body bands to get back to some semblance of what I looked like just four years ago. I’m trying to find more ways to love this old body in its new form — a body that threw my birth plan out of the window and led me to deliver a son in a hospital. This body wasn’t able to breastfeed him, and I punished myself. This body would go on to birth a daughter completely unmedicated on a bed surrounded by midwives and a husband supporting in awe. How could I not love this body?

So, how does my boob story continue?

I spent the greater part of my life in both relationships and bras that did not support me. I want better for myself and my “girls”. I want to take better care of them and, for me, that begins with getting a bra that actually fits! I've only recently learned how to properly put on a bra and I'm excited about this new journey.

More importantly, I am excited about this new journey in body acceptance.

Photo by Catalin Pateo on Unsplash