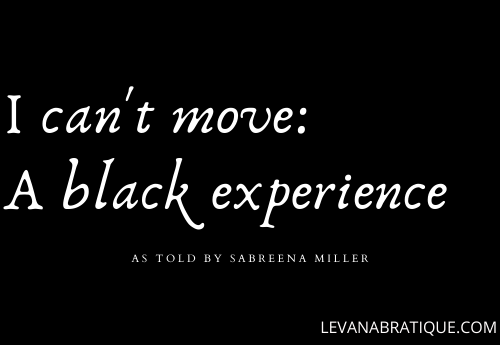 I've been having a difficult time finding the right words in response to these current, recurring events. I feel heavy — so heavy I can't move.

This all feels like a more palpable deja vu. I went looking through old Facebook posts to find old words to fit this repeat in history. Words that would speak for me. I know that girl, that version of me, had a lot to say and wasn’t afraid to say it. She had nothing to lose.

I scrolled back in time, through injustices perfectly preserved in my Facebook memories. Eric Garner. Freddie Gray. Instead, what I found was a post from 2014 — a video showing St. Louis police officers shooting and killing Kajieme Powell.

I forgot his name.

I forgot his story.

I rewatched the video, rewatched the incidents which led up to him losing his life, looked intently at his photo. Nothing. Perhaps I subconsciously lumped him into a narrative: another black man killed by white police officers. Another one — a face more representative than familiar.

I am growing numb to the killings of black people.

I don’t know what more to say at this point. I feel weakened, eroded over time. My spirit has been broken. I’m worried I've reached a point of acceptance where in my reality this is just what happens.

Operating in a sphere where I am always in double, sometimes triple, or quadruple jeopardy. Black. Woman. Gave herself to a white man. Her kids aren't really black.

Cognitive dissonance weighs heavily on me: Say something! Keep quiet! You can't be silent! Don't risk everything you've built!

Because I’ve built something I can call my own and I don’t want to lose that, but I don’t want to be silenced. It is exhausting. I'm not afraid of anyone. I'm afraid to open up again and lose my cool. Let my rage peak, let these hands speak.

I think Black people are like water. Some of us navigate fluidly, a smooth ability to take on whatever shape necessary in order to survive and attain. Others are like ice, unapologetic in their blackness, holding firm — neither a different substance than the other, just occupying different states. And too, like fire, there’s an underlying rage we possess, oftentimes viewed as defiance. I know that it’s an ingrained, passed down, genetic need for justice.

I’ve experienced racism, but not intense racism, I thought. I’ve been “hard ‘r’ed". On a separate occasion, I was threatened with arrest in my own neighborhood — a place I call home, where I serve daily — because I talked back. I didn’t like the way the cop belittled and dismissed me. I felt he just saw an upset black woman, empty, loud, useless. He didn't see how tired I was. He didn’t see a college-educated woman, who's spent her adult life in public service, who moved across state lines to serve people in his community. He didn’t think Jon was my husband. He didn’t see that I was pregnant with my daughter. I called on every earthly higher power I could at that moment, literally picked up my phone and called their phones: councilpersons, the chief of police, the mayor, and no one was speaking for me. I felt alone. But maybe I was wrong. Maybe I should have dropped it—what I knew was right—and I should have complied.

I don’t think I believe that scary, dark racism has ever touched me - not until now.

Yesterday was routine. Monday, June 1, 2020. I expected a package delivery. I tracked it, impatiently, it was marked ‘delivered’. I looked at the drop-off image and that was not my porch. All the gifts I had been teasing my husband with were just next door. This was the package that another neighbor and I watched get dropped off earlier. When a delivery truck pulled up I excitedly told her I hoped it was for me. It wasn't. We laughed.

I immediately jumped up to go and get my things, but as soon as I got to my first porch step, I actually pondered if this was a good idea. I walked over to my package. I didn’t take it. Instead, I knocked on the door and waited. I looked around for cameras. I stared at the package at my feet and walked away. I’d try the front door. I looked into the security camera and rang the doorbell. No answer. I didn’t pick up my package.

I felt foolish. I was mad at myself for overthinking this. "What are you doing? You ain't gotta ask nobody for stuff you bought! All you have to do is show them the label..."

I walked across the street to my friend's house, the one who was present when the delivery was made.“Hey, you think you can walk over with me to the neighbor’s house and get my package for me. I don’t want anyone to think I’m stealing and call the police”.

She texted the neighbor and walked over and got my package as I waited on the sidewalk. I felt weak when I realized that underneath it all, I remembered. I remembered how many people like me were killed carrying out routines. Racism and the fear of it taking my life in an instant is a part of me. It is a natural threat. A predator. At that moment, I was happy to have my neighbor, my friend, by my side.

Overall, I believe a lot of us are tired and spread thin. Currently navigating a pandemic, mental health issues, families, children, jobs, marriages, a double consciousness that breaks us into even more tiny, fragmented, pieces.

To be black is to be many things. It’s the strain of constantly having to be aware — a lifetime of collecting faces, flipping through, and choosing the right one to match the situation. One face for your real friends — aunties, and cousins. Another for your coworkers, your bosses. More faces for court, and law enforcement, neighbors, and opportunities.

I believe that we believe in justice, but not in this justice system. We don’t, at the core, condone violence or destruction, but we absolutely cannot accept yet another senseless killing, and, at this point, I refuse to tell black people how to "cry".

I can't move right now, so I'm letting everyone dance freely around me, in the way that feels most expressive to them.No, I won’t regurgitate Martin’s poetic prose about riots. I'm not asking my white friends and family to speak on my behalf. I shouldn't have to and, honestly, those pressed to say something in our defense because it's the "right thing to do" don't ever really get the words right. They can be like my neighbor and use their privilege to shroud others when the necessary time comes. That's a start.

More than anything, morality is a conviction of the heart, and if black issues don't truly move you the way black culture does, just sit this one out.

No, I can’t move right now, but I thank God I'm still breathing.